Amongst the animals: Artist Brad Rude’s bronze sculptures welcome all

A beaver is standing on a granite pedestal outside the front windows of Magruder Hall on the Oregon State University campus. His lips are parted in a mischievous grin. Two large incisors peeking out. He’s standing up on his hind legs with his two front paws raised as if he’s about to start a conversation.

“Howdy,” he says without words. “Would you like to boop my adorable nose? Want to get a selfie with me?”

No one can resist.

Statues with heart
Affectionately dubbed “Justin Beaver” by his creator Brad Rude and Rude’s partner Stacy, the beaver is one of 18 animal statues cast in bronze and displayed at the entrance to the home of the Carlson College of Veterinary Medicine.

But displayed is almost the wrong word. Yes, they’re sculptures, inanimate objects shaped first in clay, then cast in bronze, but display is a word for taxidermy. These animals are alive. You can feel it in your heart. You can see it in the dancing motion of the metal: the beaver, upright, alert and friendly; the retriever, tail high and ready to play a game of fetch; the black bear, all seven feet of him reared up to look beyond imagined blackberry bushes to see what made a sound; the great horned owl, very serious resting on his roost and thinking owl thoughts; the jackrabbit, ears on high alert ready to bound through the fragrant sage in the grasslands hills around Walla Walla, Washington where Rude and Stacy live and work.

The animals, 11 life size and seven to scale, surround two picnic tables and two standalone benches handcrafted by Rude from durable black locust planks. They stand on granite selected by Rude from quarries and cut to size.

“I've been sitting at this table for about two years, and I've moved things dozens of times,” said Rude as he rested at one of the tables while installing the artwork over spring break. As he worked on the project at his studio in the foothills of the Blue Mountains east of Walla Walla, he would set and reset the arrangement as pieces were finished, looking to strike just the right note.

“It’s essentially a composition, and it does have its own kind of rhythm,” Rude said. “That's really what separates it from a singular sculpture or a static, kind of formal, statuesque situation. It's really designed [for you] to be immersed in this space and twist around in your seat and everywhere you look there's another really good view.”

Art for all
Though conceived first in Rude’s mind's eye, this composition descends from an even earlier vision. Since the late 1970s, Percent for Art legislation in Oregon has set aside “no less than one percent of funds for the acquisition of public-facing artwork in all state building construction plans with budgets over $100,000,” according to the website of the Oregon Arts Commission which oversees the program. For each Percent for Art project, a selection committee is formed to determine the goals for the project and to evaluate and select an artist.

An expansion of Magruder Hall, adding 22,000 square feet of instructional and hospital space for the college, was completed in 2019, triggering this funding. Ryan Burghard works for the Oregon Arts Commissions and was the project manager for this work. “What we had really set out for the project was that the committee wanted something that was uplifting and inspirational, something that recognized and built upon the established theme of animal-centric and veterinary-centric works at Magruder Hall,” Burghard said. “The committee wanted something that simultaneously was lovable, but also had a lot of artistic merit to it as well.” 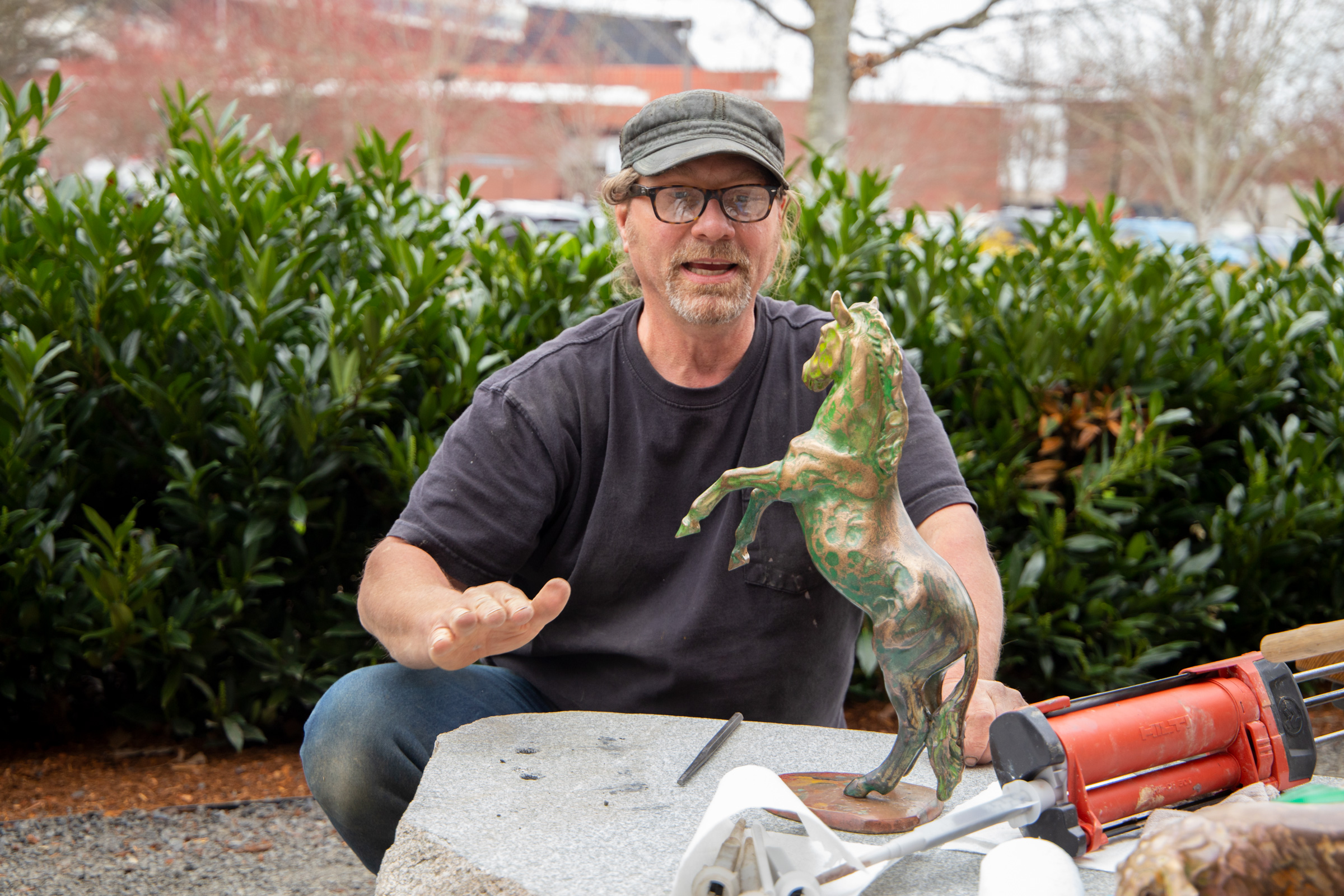 A cow, a coyote and a casting
Mother Nature’s creatures are Rude’s muse and he’s been casting them in bronze for the last 30 years. His animals can be found across the Pacific Northwest and beyond: Seattle’s Woodland Park Zoo; the Boise Art Museum; the Buffalo Bill Historical Center in Cody, Wyoming; Doernbecher Children’s Hospital in Portland, Oregon; and now here in the heart of the Willamette Valley.

Though born in Montana, Rude has lived in Walla Walla since he was 10. An artist from a young age, drawing and painting in sketchbooks, Rude took a job at the Walla Walla Foundry in high school. He learned the craft of bronze sculpting by casting other artists’ work. “You're supporting them, you're doing what they want, and in certain circumstances, you're collaborating with them.”

The collaborative work was inspirational and resonated with Rude. He began sculpting models of his own. At the age of 22, he made a plaster model of a life-size cow with a coyote on its back. The cow facing one way and the coyote the other. “It was one of my first sculptures where I really was starting to talk about friendship between different species” Rude said. “There’s a story there just with the two figures … how did the coyote get up there? We don’t know. Did he jump? Did the cow help him? Are they really friends, or do they just have a symbiotic relationship of some kind?”

Rude had no plans to cast it in bronze as the cost was prohibitive, but, at this same time, Rude asked the owner of the foundry for a raise. “He said: ‘How about instead of a raise we’ll grab a couple other employees and we'll get this [plaster model] molded, get waxes made, cast it in bronze and that'll be your raise for the year?’ I go, ‘Done deal,’” Rude said.

Soon after finishing this first bronze of his own, Rude secured his first show at Foster/White Gallery in Seattle. The life-size sculpture was displayed out front of the gallery in prime foot traffic real estate near Seattle’s professional sports stadiums. After being on display for a few years, a buyer purchased it and installed it as a public display in the nearby city of Kirkland, launching Rude’s public art career.

A common bond
Rude has continued working in this animal-centered theme of interspecies interaction. It’s his way of expressing the wonders of the natural world and also reflecting on humanity’s place amongst the creatures.

As a kid, Rude was raised in a household where humans were “put on a high pedestal” with the belief that they were superior to the animals, he said. As he grew older, his beliefs shifted and he became fascinated with the complexity of the animal kingdom and the consideration of what it was like before animals were domesticated and “humans were on the same playing field as the animals,” he said. “So I was just really super fascinated with animals. And I knew that they were special, and I wanted to really make them my main focus in what I was trying to communicate as an artist.”

The installation at the Carlson College of Veterinary Medicine is named “A Common Bond | All Together.” The name and the design sum up Rude’s philosophy.

With comfortable seating and room to roam amongst the statues, people are invited into the space with the animals. Everyone, every creature, “gathering and getting together,” he said. “You're hanging out with the rest of the crew, your friends: your animal friends and your human friends.

“Animals are just like us humans. We’re all together. It’s pretty simple, but it's profound in a way too, because it really is the way things work on the most fundamental level. Everybody wakes up in the morning the same way: you go to the bathroom, you get a drink of water, you crawl out of your bed or your cave or your den or burrow, and you get to work. And then you eat through the day, and you relax and you rest and you eat some more and you make sure your family is taken care of. Then at the end of the day, you go to bed just like them. You get up in the morning, and you do it all over again.”