There’s a quote by animal activist Anthony Douglas Williams which reads: “When I look into the eyes of an animal, I do not see an animal. I see a living being. I see a friend. I feel a soul.”

When Jeannine Marshall-O’Brien looked at her beloved Leilani, she not only felt a soul, but she saw a little Shetland sheepdog princess.

“She was a little princess her whole life. I'll tell you what, she pranced,” Marshall-O’Brien said. “Even when she went through the halls of the hospital, she just would run and prance.” Leilani spent many hours of her life at the Oregon State University Carlson College of Veterinary Medicine’s Lois Bates Acheson Veterinary Teaching Hospital.

Leilani passed in March, but her spirit lives on in the memories of those who loved and treated her. On August 23, Marshall-O’Brien and her husband Tom O’Brien named and dedicated the Leilani Comfort Room in the CCVM hospital with a gift through the OSU Foundation. The comfort room is where the couple consulted with their veterinary care team when making tough decisions.

In naming the room: “We knew that we wanted to do something very special in Leilani’s remembrance. To keep her sprit always alive [at the hospital] because she was so well taken care of,” Marshall-O’Brien said. “I'm hopeful that all other pet owners, fur baby owners I like to call them, will find some comfort as we did. Because it really is a comfort room.”

In the room, Williams’ quote flanks a photo of Leilani in a display. The poem “The Rainbow Bridge,” about pets and their human companions reuniting in the afterlife, flanks Leilani’s photo on the other side.

Leilani, full name Leilani Pearl, was born on December 7, 2009. Marshall-O’Brien first met her in late January 2010. “Through a couple of acquaintances here in Salem [Oregon], I found out that there was a litter of shelties that had been born up in Puyallup, Washington,” Marshall-O’Brien said. She’d been looking for a sheltie for about a year and a half, but had yet to find the “perfect little girl.” So, she took a road trip north to meet the litter.

“There were six little babies all together, and she was curled up with a little kitty cat in front of the fireplace when I met her,” Marshall-O’Brien said. “And I instantly fell in love with her, and she instantly chose me. And so, I knew it was a perfect match.”

The puppies still had some growing to do before they could leave home. Especially Leilani. “She was the runt of the littler by a long shot. I could hold her just in the little palm of my hand,” Marshall-O’Brien said. Leilani was so small in fact that she needed to be bottle fed. A couple weeks after her visit to Puyallup, Marshall-O’Brien got a phone call that Leilani had been taken to the veterinarian by the breeders. When bottle feeding, they’d noticed that Leilani would sometimes have milk come out of her nose. “Well come to find out, Leilani had been born with a cleft palate,” Marshall-O’Brien said.

She had a tough decision to make: continue with Leilani’s adoption or keep searching for another sheltie?

“I already had Leilani named when I first met her,” Marshall-O’Brien said. “I decided, she needs her mommy; I'm going to adopt her.”

She brought Leilani home to Salem as soon as she could and started making phone calls to find the medical care Leilani would need.

“I knew Leilani was having difficulties. Food was starting to get lodged in that palate, and she would have aspirated,” Marshall-O’Brien said. A local veterinary clinic mentioned the specialty care capabilities just down the road at the CCVM’s teaching hospital.

Marshall-O’Brien called the hospital and explained the difficulties Leilani was having. Within the hour, Leilani was admitted and placed on a feeding tube. “She was too tiny to have surgery done at that point, and so we had to wait until right about the first of April when Dr. Bernard Séguin did the first surgery on her,” Marshall-O’Brien said. “Surgery was on a Tuesday or Wednesday, and the first day that I was able to come back down to Oregon State and actually see Leilani was on Easter Sunday morning. And I knew that was a sign that she was going to make it.”

Make every day a miracle

In the first three years of her life, Leilani was in and out of the hospital for a series of surgeries related to her cleft palate. “There was never a day I missed coming down to hold her, even if it was for five minutes,” Marshall-O’Brien said. “She always knew I was there and that I cared for and loved her.”

During these visits, the hospital’s veterinary care team (students, staff, nurses and doctors) formed a strong bond with both Leilani and Marshall-O’Brien. She recalls that she and Dr. Séguin (now with Colorado State University) made a pact that if Leilani made it to her first birthday, they would throw a huge party for her.

Over the years, Leilani’s second, third and seventh birthday parties (her golden, having been born on Dec. 7) were celebrated at the hospital with accompanying cake and buttons with new inscriptions: “Treasure Life’s Precious Moments,” Thank You For Being My Friend” and “Happy ‘Golden’ Birthday.”

Thank you for being my friend

When Leilani was three years old, Tom O’Brien entered the picture. “Well, she was possessive of Jeannine. When I moved in, the first night I spent here, I bent over to get undressed. She bit me in the butt,” O’Brien chuckled. “I think it was her way of saying, ‘Wait, you're not welcome here.’ It was funny.”

Though her loyalty clearly lay with Marshall-O’Brien, O’Brien was soon also an object of her affection. “She was Jeannine’s puppy all the time that we had her,” O’Brien said. “I knew that, but I couldn't sit down on the couch without her crawling up and licking my face. And without exaggeration, for 20 minutes at a time she'd lick my face. She was a love bug.”

The three made a tight-knit family. Every morning they would all eat frozen blueberries with breakfast – Leilani’s favorite food. She was always in the kitchen on the lookout for dropped morsels. Leilani even wore a watch to know exactly when meal time was. “When it was her supper time, she would push the envelope and try to get fed 30 to 60 minutes early,” Marshall-O’Brien said. “Daddy would tell her, ‘in just a little bit’ and show her the thumb and index fingers together and say those words. She would go lie down in one of her favorite beds and wait until it was time to eat.”

With visits to the hospital for her cleft palate condition and other ailments a common occurrence during her life, Leilani also became close to many who worked there. “She had so many friends there that she loved being there. Everybody loved her and hugged her,” Marshall-O’Brien said.

Austin Bell in particular embodied this. At the time, Bell, DVM ’10, was a veterinary student. “He would carry her around the hospital anytime he had break. He literally sang little lullaby songs, and it was just so touching,” Marshall-O’Brien said. “To this day, there's still staff at the college that just absolutely love her. They would say, ‘Leilani's here, Leilani's here.’ You know, whether it be in ICU or X-rays or CT scans or whatever, she just was loved upon. That truly speaks volumes for the hospital as a whole.”

“I think it's safe to say we're both very impressed with the school,” O’Brien added. 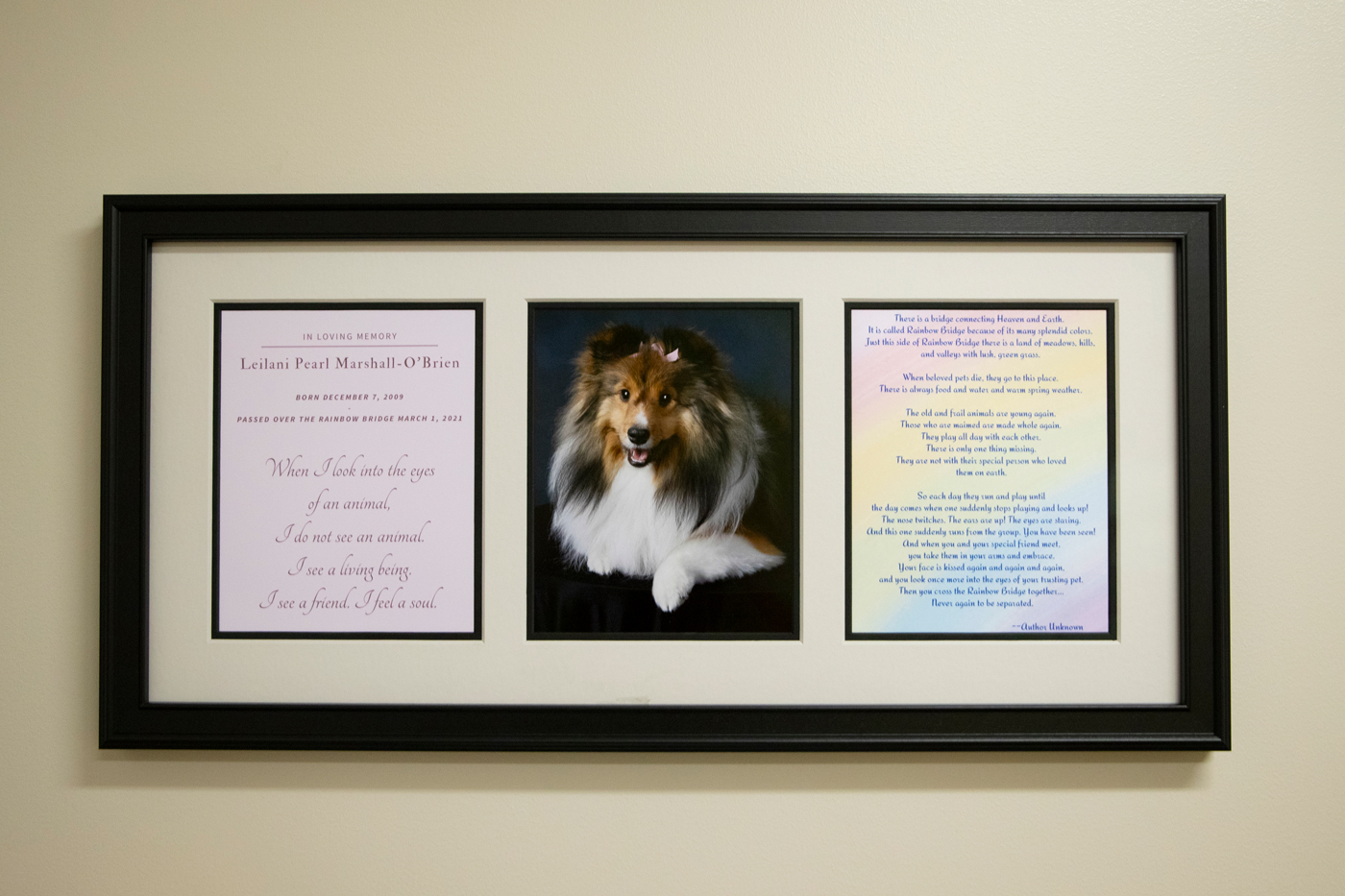 Over the rainbow bridge

In early 2021, the “miracle sheltie” was 11 years old. The year prior, she’d been diagnosed with transitional cell carcinoma, a type of cancer, and had been receiving treatment at the college.

Leilani and her family were again at the hospital for a checkup.

In the comfort room, Marshall-O’Brien and O’Brien discussed the latest prognosis with Dr. Katie Curran, veterinary medical oncologist. The cancer had progressed.

This would be their last visit.

“The Rainbow Bridge” reads in part:

“When an animal dies that has been especially close to someone here, that pet goes to Rainbow Bridge. There are meadows and hills for all of our special friends so they can run and play together. There is plenty of food, water, and sunshine, and our friends are warm and comfortable.

“The animals are happy and content, except for one small thing; they each miss someone very special to them, who had to be left behind … They all run and play together, but the day comes when one suddenly stops and looks into the distance.

“You have been spotted, and when you and your special friend finally meet, you cling together in joyous reunion, never to be parted again. The happy kisses rain upon your face; your hands again caress the beloved head, and you look once more into the trusting eyes of your pet, so long gone from your life but never absent from your heart.

Then you cross Rainbow Bridge together.”

O’Brien and Marshall-O’Brien find comfort in their memories. They find it in sharing Leilani’s legacy through the Leilani Comfort Room.

“She was a little human being. She really was. She just understood our body language and we understood her body language,” Marshall-O’Brien said. “We had the tightest connection more so than I ever had with a fur baby in my entire life.”

“Hopefully the love that we shared gets transmitted to other people in that room,” O’Brien added.

Just another ‘no typical day’ as a zoo vet