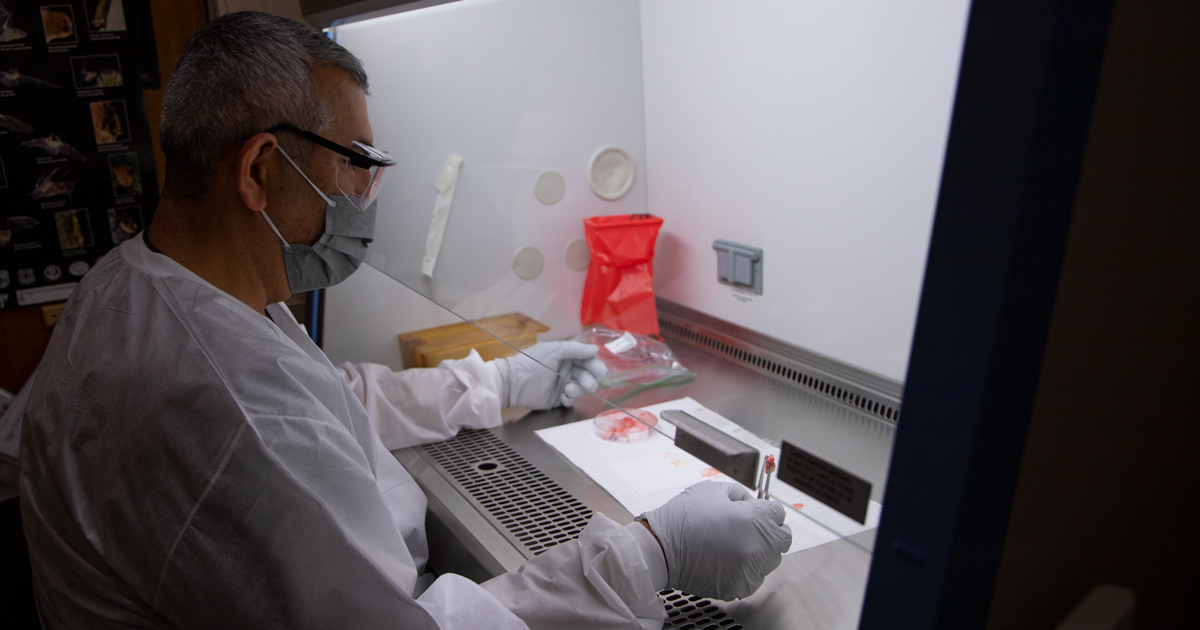 Microbiologist Nelson Osorio prepares a slide for rabies testing by blotting the sample tissue on it.

Did the horse have rabies? That’s just one of the questions that Wendy Black and Nelson Osorio can answer. Black and Osorio are both microbiologists in the Oregon Veterinary Diagnostic Laboratory at the Oregon State University Carlson College of Veterinary Medicine.

They and their colleagues in the OVDL are mystery solvers for cases of animal disease from across the state of Oregon and beyond into the greater Northwest.

Here’s a recent, off-the-top-of-the-head list from Black: “canine herpesvirus, canine parvovirus, canine distemper. I just recently finished some electron microscopy work where we identified a couple of different fish viruses and some pox viruses. So it's kind of cool stuff. We've done some work over the last quite a few years isolating and identifying a gamma herpesvirus in bears.”

Every day, more than 50 different specimen accessions are run or processed at the OVDL to diagnose a huge variety of animal diseases. Today one of the specimen samples will answer the question of whether the horse was rabid.

This question, and the sample that goes with it, came not from an external source but from within the college—specifically from veterinarians and veterinary students working in the Lois Bates Acheson Veterinary Teaching Hospital.

“Initially we thought that the horse was a head trauma case because it was displaying neurologic signs,” said Dr. Avery Loyd, a large animal clinical fellow. Some imaging ruled that out. Next it was a nasal swab to check for herpes as that virus can cause neurological signs. That came back negative.

“Then on any neurologic case, you have rabies on your differential list. So, it was lower on our list, but since there is a suspicion of it and the herpes tests were negative, we had to submit the rabies testing for that,” said Loyd. “Piece together the puzzle. Can we get some answers? I really hope so.”

The answer to this question was particularly important as many students, veterinarians and technicians had interacted with the horse in the hospital. Any potential exposure to rabies needed to be ruled out.

As the horse’s neurological condition had deteriorated rapidly, the veterinarians and the owner had decided on euthanasia to spare any further suffering. The horse was taken to the necropsy lab in the OVDL for a postmortem. There samples of brain tissue were taken and sent over to Osorio and Black for rabies testing. “If it's negative, they can continue doing the necropsy,” Osorio said. “So that's why they need to get the results today, because it's Friday, and they want to go into the weekend without having to have the animal waiting until possibly Monday for results.”

Working in a secure part of the laboratory and keeping the tissue within a containment cabinet, Osorio takes small pieces of the cerebellum and brainstem and impresses, or blots, them on glass slides for later inspection under a microscope. “What we're doing is direct fluorescent antibody testing,” Osorio said.

“The anti-rabies antibody is fluorescently labeled so that if rabies antigen is present in the brain tissue being tested it will give off a very bright apple green color,” Black adds.

After impressing the tissue on the slides, the slides go into acetone to fix. After an hour of fixation, Black removes the slides from acetone, air dries them, then applies the anti-rabies antibody conjugate to them and incubates the slides for 30 minutes. Then after multiple washes in buffer the slides are air dried. Black then takes the slides for microscopic inspection.

She compares the slides to a both positive and negative reference slides from tissues that the lab has on file. 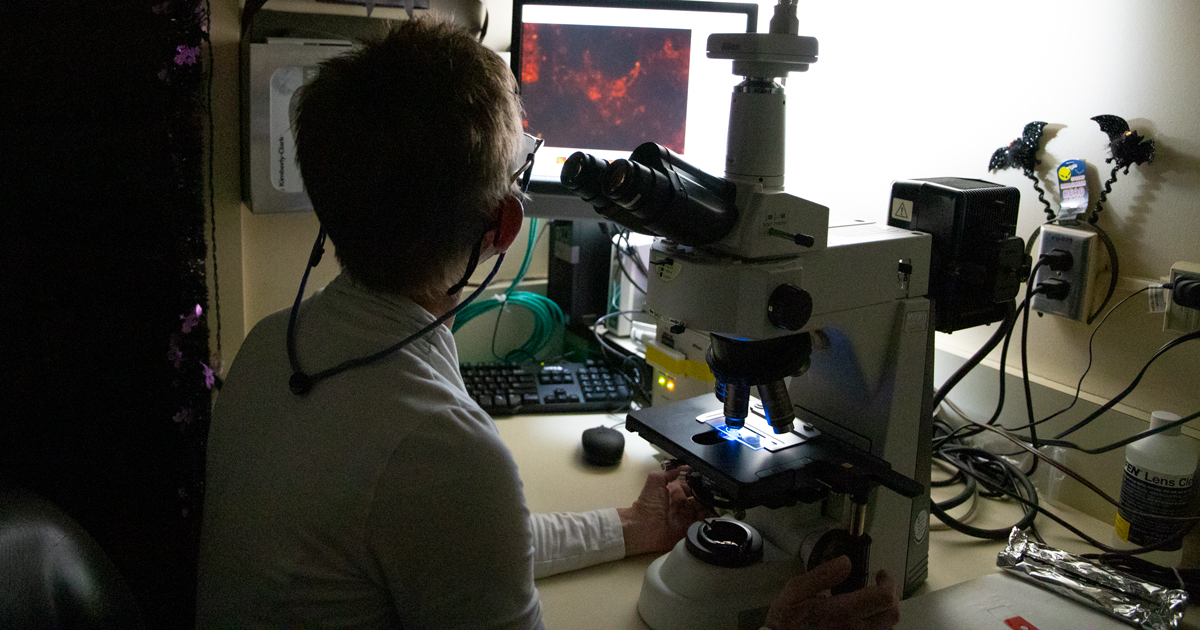 Microbiologist Wendy Black inspects the slide for signs of rabies.

For each slide she inspects, Black breaks it down into 40 different grids. “In order to maintain consistency, we read the slides the same way every time. We start from one end, read across for so many fields, drop down slightly and then we come back reading the slide the other way for forty different fields per well for two different brain tissue samples, two different conjugates and two different readers,” Black said.

In this case, “I'm not seeing anything that just jumps out,” Black said. “Usually when they're positive, they’re positive!” The candy apple green from the fluorescent tagging would be shining like a neon open sign.

The horse did not have rabies. The staff that interacted with it, including Loyd, don’t need to go into rabies exposure protocol.

Now it’s back to the other 50 plus samples in the queue.

Editor’s Note: Later findings revealed that the horse had listeriosis, a bacterial infection.

Just another ‘no typical day’ as a zoo vet

“It is clear Dr. Spagnoli loves to teach,” wrote one student in the nomination materials.

Alumna gives back in memory of Benny the boxer

Though a bit of “trouble,” Benny quickly won their hearts.