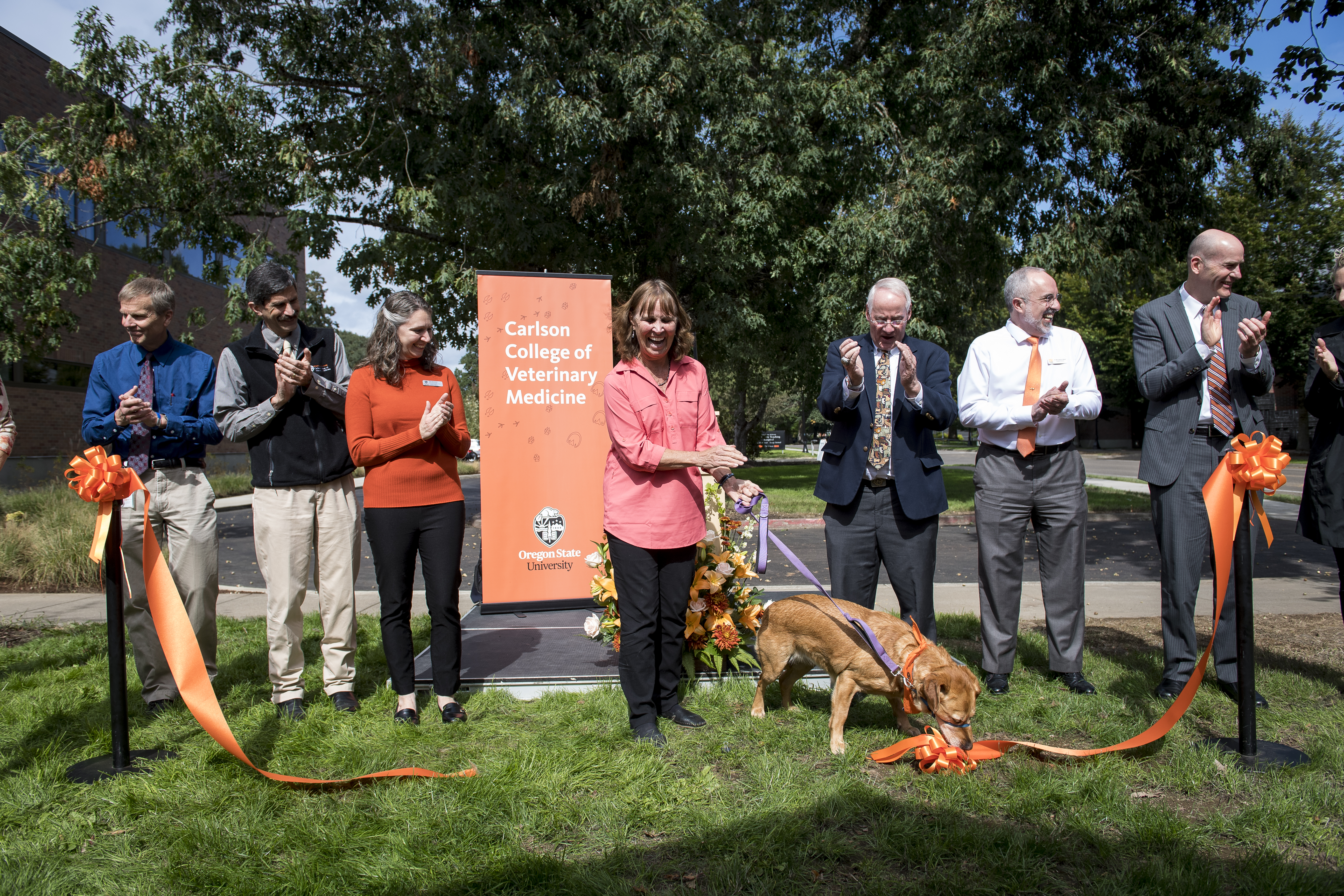 On September 23rd, the college celebrated a major expansion of Magruder Hall with a ribbon-cutting ceremony, or rather a ribbon-chewing ceremony.

Dean Sue Tornquist's dog, Cassie, took the place of scissors and 'chewed' the ribbon with the incentive of peanut butter.

More than 200 people attended the grand opening, which adds nearly 22,000 square feet of instructional and hospital space.The $18 million project added a new wing to the Lois Bates Acheson Teaching Hospital, more than doubling the amount of exam space, and providing a larger reception area for the facility’s small animal hospital.

The new wing also houses oncology, cardiology and internal medicine services as well as office space for veterinarians and residents, freeing up room elsewhere in the building for an expanded surgery area.

Another new wing in the Magruder complex provides space for a lecture hall, conference room, and (the student's favorite) a coffee shop.

“We’ve been working on this project since 2010,” Tornquist said in her opening remarks at Monday’s ceremony. “That’s when we knew that we were rapidly outgrowing the small animal hospital.”

OSU President Ed Ray offered a personal testament to the dedication of the teaching hospital’s staff, who he said grieved with him after caring for his beloved pet, Gus, during the dog’s final days.

“They love their animals as much as you all love your animals, and you couldn’t ask for kinder, more compassionate or more competent care than you get here,” said Ray.

“We’ve got the people, we’ve got the talent and now we’re getting the facility that will allow them to show what they can do to help animals and to help all of you.”

Still under construction is a specially shielded concrete vault to house a linear accelerator to provide radiation therapy for cancer. Currently, Oregonians have to drive their pets to Washington for treatment.

The Magruder Hall expansion was financed in part by a $5 million gift from Gary R. Carlson, the OSU alumnus whose pledge to provide a $50 million estate gift prompted the university to rename the college in his honor last year. Additional funding came from the Lois Bates Acheson Endowment and a loan from OSU’s internal bank, Tornquist said.

Thanks to the Corvallis Sewing Bridage for Providing the Masks!

Learn How Our Pets Keep Us Healthy

Save pets’ lives by making radiation treatment available in Oregon

Animal lovers Ken and Celia Austin hope others will join them in donating to a cancer treatment fund.

The college added another 22,000 square feet for students and hospital

A Passion For Animal Rescue Inspires A Career

New Weapon In The War On Cancer

Assistant Professor Brian Dolan is investigating the use of immunotherapy to fight cancer.

New treatment of animals with cancer will provide information that can save human lives too.