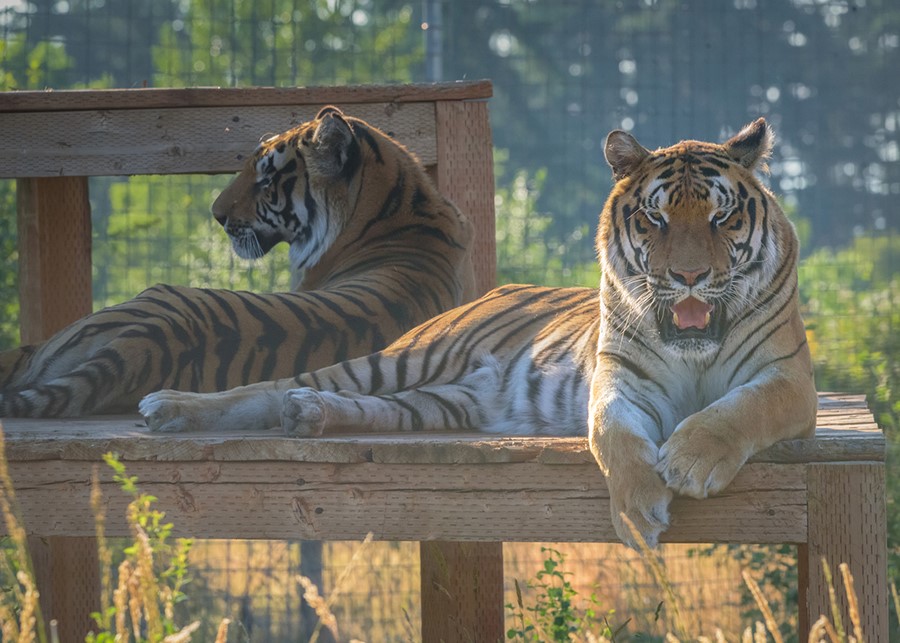 Hobbes the tiger lives at WildCat Ridge Sanctuary with his brother Calvin (background). Photo courtesy of the sanctuary.

Dr. Ron Mandsager can make a pacing tiger take a nap. Step one is selecting the appropriate dose of sedative. Step two is taking off his surgical mask. “It’s definitely not a time to have glasses fogging over!” he said. From there, it’s a trick of making sure the hips don’t lie.

“I’m concentrating on trying to time an accurate poke with the pole syringe as he’s pacing in the cage – I was timing my stick with him swinging his hips to the closest point to me,” said Mandsager, clinical associate professor of anesthesiology at the Oregon State University Carlson College of Veterinary Medicine. When the timing is just right, Mandsager gives a quick jab and the pneumatic device in the pole syringe quickly depresses the pressure-sensitive plunger. Hobbes, a 300-pound tiger, is soon purring like a kitten.

‘Exotic’ escape
Hobbes and his brother Calvin were born at the infamous Joe Exotic’s Oklahoma wildlife park in 2013. Yes, that Joe Exotic, convicted felon and protagonist of Netflix’s “The Tiger King.” For the first three months of their lives, the pair of twins were exploited as so-called “photo cubs” – trotted out for the paying public to get a cute, cuddly tiger-baby pic. The problem is, tigers grow. No longer exploitable for cuddly photos, they were sold off to a different roadside zoo where they spent the next several years living in barren concrete pens.

Through a series of fortunate events, they were rescued in 2016 and taken in by the accredited nonprofit WildCat Ridge Sanctuary in rural Scotts Mills, Oregon. They’ve lived there ever since. WildCat Ridge’s mission is to be a “last hope sanctuary” for animals coming from abusive situations, according to its website. It’s run by Cheryl Tuller.

‘Tiger boy’ gets a tummy-ache
On Tuesday, March 1, Hobbes woke up, was refusing to eat and looked extremely uncomfortable. The Oregon Zoo’s head veterinarian Dr. Carlos Sanchez, a friend of the sanctuary, offered to give Hobbes an exam and discovered a mass of debris in Hobbes’ stomach.

After efforts to get Hobbes to evacuate the mass on his own were unsuccessful, sanctuary staff brought Hobbes to the Carlson College of Veterinary Medicine’s Lois Bates Acheson Veterinary Teaching Hospital for surgery to remove the mass on Friday, March 4. The teaching hospital has provided emergency treatment for other big cats from the sanctuary in the past, and Tuller was confident in the team’s expertise.

It’s there that Hobbes met Mandsager and the rest of the veterinary team including Dr. Katy Townsend, associate professor of surgery.

It takes a team to cure a tiger
The excitement level for the team is “off the scale” when a big cat comes into the hospital, according to Townsend. An apex predator is in their hands. “There is always a nervous/excited energy,” she said. “We want to ensure that everyone is safe, but it is such a privilege to work on these animals.”

It’s a huge team effort to keep everyone safe, including the patient, and to pull off a successful procedure. On the anesthesia team with Mandsager were veterinary nurses Shauna Feldsher, Ami Gilkey and Caitlin Christian. Joining Townsend on the surgery team were nurse Brianna Garber; residents Drs. Ming Lu and Alex Alvarez; intern Dr. Kaitlynn Samborsky; and veterinary students McKinley Smith and Cassie Weber.

While the anesthesia team kept Hobbes dreaming tiger dreams, the surgical team pulled out scalpels and forceps and got to work. “We had to perform a gastrotomy, which is opening up the stomach to remove a bunch of foreign material that was stuck,” Townsend said. “It is shockingly similar to working on a regular pet cat! Similar anatomy, but just on a big scale. This is a great learning experience on so many levels for the students. Working with wildlife has its inherent challenges, and working through the logistics and preparation is an invaluable tool for the students that they can use in other settings. Many vets will never have the experience of working with large wild animals like this. The surgery and anesthesia students said to me that nothing is going to top this in vet school!”

From the incision, the team pulled out nearly five pounds of “straw, fur and cardboard from enrichment boxes” Tuller said. Enrichment boxes are filled with items to stimulate an animal’s senses. Hobbes had snacked on his box.

Go behind the scenes of Hobbes' surgery with this video filmed and produced by Dr. Ron Mandsager. Warning, contains some graphic surgical footage.

Hobbes un-hobbled
With a fresh scar from his stitches, Hobbes is back on the mend. “He had a bit of trouble waking up but is doing really well now,” Tuller said. “We hold our breath for a few days until they have recovered and feeling back to normal, and I think we all let out a collective sigh of relief and accomplishment when they start to feel better,” Townsend added.
For now, Hobbes is eating a diet of ground food mixed with Pedialyte and his medications and is getting more and more active.

“It’s very rewarding to know that you had a part in helping a magnificent animal like Hobbes,” Mandsager said. “These types of cases take significant planning, and seeing the plan put in to play, and having it work is always a rush. I enjoy the teamwork involved – and it’s important to remember that while we had a team working on Hobbes, other members of our team were busy taking care of several other patients. Friday was a very busy day for us, and Hobbes was just one part of it. Its always fun when the team tackles a challenging day successfully.”

Amongst the animals: Artist Brad Rude’s bronze sculptures welcome all

Rude's sculptures line the walkway to the front entrance of the college.

Hobbes is back on the mend.

The grants will help the OVDL expand its role in responding to large disease outbreaks.