Jorie Clark and Luca Bratsi on the Isle of Harris, Scotland.

In western Montana near Yellowstone National Park there’s a cabin named Casa di Luca. It’s named for a remarkable dog who in turn was named for a famous character from literature and film.

Rewind to the dog days of August 2004. Peter and Jorie Clark are brainstorming names for their five-week old black Labrador puppy.  “The Godfather is our favorite movie and my wife is of Italian heritage. So we were thinking of an Italian name, and she suggested Luca Brasi,” said Peter Clark, Distinguished Professor of Earth, Ocean and Atmospheric Sciences at Oregon State University. “He was always considered very loyal to the Godfather, and our Luca Bratsi (we added the ‘t’) grew into being extremely loyal.”

Almost from day one, Luca went everywhere that Clark did. “I started bringing him to my office when he was very young,” Clark said. Clark would transport him in the car in a “white plastic laundry basket filled with blankets.”

He would walk Luca up and down the halls (Luca was especially fond of the front office staff who spoiled him with treats) to give them both a break from the confines of Clark’s office in Wilkinson Hall. Soon the hallway wanderings stretched to frequent strolls around campus.

Past the palm trees of the Ocean Administration Building, the giant sequoias of the Memorial Union and the gnarled Douglas fir whose green needles contrast with the vibrant purples and pinks of the Victorian trim of Fairbanks Hall. From Wilkinson Hall down to Student Legacy Park across from Dixon Recreation Center.

As a young pup, Luca’s laundry basket also made the journey. 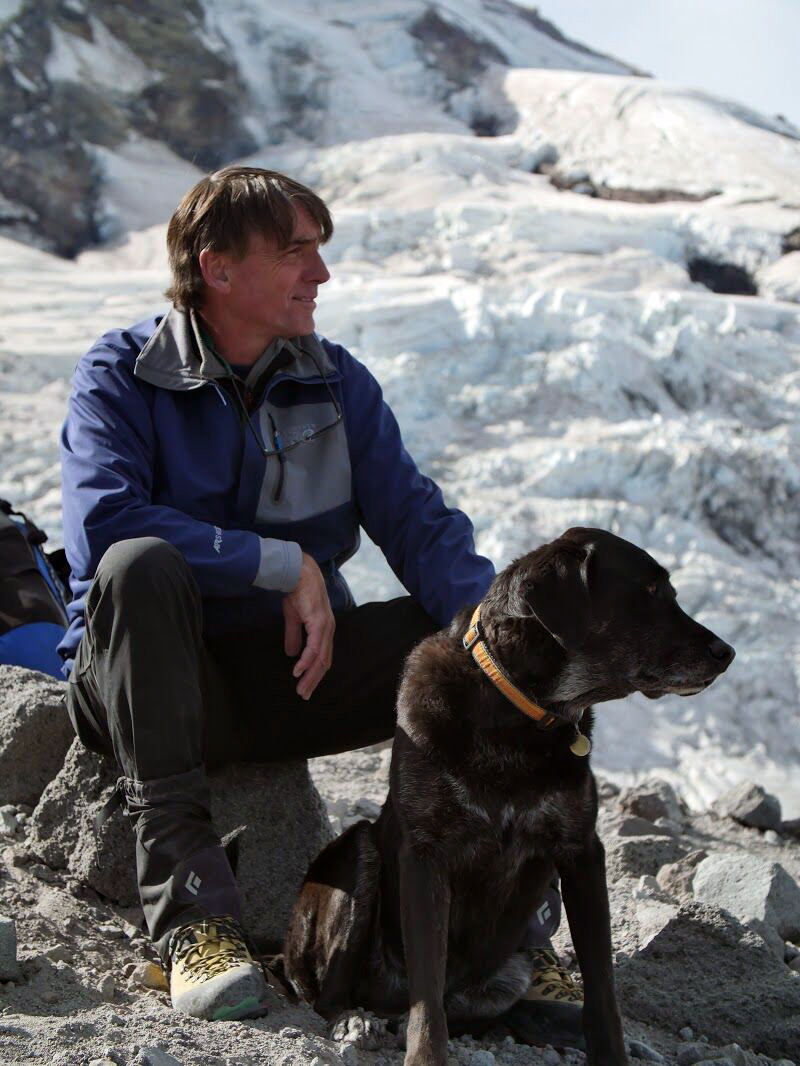 Clark would place it by his “blue soccer bag” on the edge of the field where he would join the Monday/Wednesday/Friday lunchtime soccer pickup game that’s been going at Oregon State since the early 1980s. “He would just stay in there, and I never had to say anything – he just knew to stay in the basket,” Clark said. “And then as he grew older and grew out of the basket, he knew my blue soccer bag, and he always stayed within five or 10 feet of it. He never needed a leash.”

It’s a habit that Luca never grew out of. He was a fixture at Clark’s side as they strolled campus, and he would sit or lay quietly and calmly by the soccer bag at every game.

Luca would let you give him a pat on the head and acknowledge a, “Hey, Luca,” but he wasn’t a dog that begged for attention, or even sought it out. He reserved his affection for the Clarks and a few people closest to them.

“I have some colleagues on campus who are also good friends,” Clark said. “He picked up on that. It must’ve just been the body language. But there were three or four out of the tens of people in our department, and this includes a couple of my graduate students, but only a couple, that he just sensed something about them and the relationship they had with me. So that, where he would largely ignore other people, whenever he saw them, he just really wanted to be with them and he would get super excited.”

The Clarks in turn made it a point to honor this undivided and unquestioning loyalty. Though their work (Jorie is a geologist and archeologist) took them around the world, the Clarks made every effort to take Luca with them.

Luca went with them to Harvard for three months during one of Clark’s sabbaticals. “They’re dog-friendly there in the department, so he was welcome to come into the office with me every day,” Clark said.

Luca went with them to an annual geology conference in San Francisco.

He went to England and Ireland, and spent three months in Edinburgh, Scotland, during another sabbatical. “It was winter,” Clark said, “and with the snow and ice on the ground, Luca would wear his red booties around the city, which always drew curious looks from the Scots.”

Every summer, Luca and the Clarks would spend the sunny months at Casa di Luca where Luca would swim and Peter and Jorie would fly fish.

On the rare occasions when Luca couldn’t come with them on their travels, they made a point of “never kenneling him,” Clark said, but rather getting a friend to stay with Luca at their house.

It was early on Sunday morning in January 2016 that the Clarks’ and Luca’s journey through life together took them to a part of the Oregon State University campus they hadn’t frequented before.

“It was right after midnight. I woke up and Luca, who slept on the bed with us, had gotten off the bed and fallen over,” Clark said. Sensing something wrong, the Clarks rushed Luca to a local emergency vet clinic.

Luca’s spleen had burst. The veterinarians performed a splenectomy. They also found a mass of coagulated blood in his abdomen, which they removed. Luca was sent home on Monday morning with the warning to the Clarks that there was still some blood in his urine that they should watch to see if it cleared up.

“I was pretty concerned, but they said, ‘Well, if you have any questions or want a second opinion, call the vet school, make an appointment,’” Clark said. As soon as they got home, Clark called and scheduled an appointment at the Carlson College of Veterinary Medicine’s Lois Bates Acheson Veterinary Teaching Hospital.

But then just a few hours later, Luca got up from his bed and walked through the laundry room toward the door outside, “I swear he was telling me, ‘Hey, we got to go now,’” Clark said. “So I called the school, and told them that I made an appointment, but this could be an emergency. So they said, ‘Bring him right in.’ They greeted us with a gurney and brought him inside. And that started our first visit there, which turned out to be amazing.”

Long story short, Luca ended up needing a second surgery to remove another mass found during a CT scan. He also spent five days in the intensive care unit as he recovered to monitor a potential life-threatening blood problem called disseminated intravascular coagulation that “ultimately causes both inappropriate clotting and bleeding at the same time,” according to Luca’s file.

“I basically camped out at the vet school that whole week. I would go off to teach my class and come back,” Clark said fighting back tears. “The veterinary students and faculty regularly came out to give me an update.” Throughout the first half of the week, it was “no progress, no improvement” but then on Thursday “his blood work started to turn in the right direction,” Clark said.

“The odds of Luca surviving were really low, but he was a fighter and I like to think that he fought through it,” Clark said. “By Friday evening we were able to bring him home. So that was the first time there. And I just credit them with the unbelievable care that they gave him – not only the medical care, but also the emotional support.”

We don’t know where our walks in life will lead, and it turned out that for Luca and the Clarks there would be many more visits to the veterinary hospital on the west side of campus near the giant oak trees of 30th street.

While doing the CT scan on his first visit, Dr. Susanne Stieger-Vanegas, Camden Endowed Professor in Diagnostic Imaging, had spotted an anomaly unrelated to the mass in his abdomen. “Again, this was another example of just how amazing they are,” Clark said. “They said, ‘Well, we saw this and we're not quite sure what it is, but it looks a little unusual.’”

The spotting of the abnormality led to a diagnosis of cancer in the cecum (the beginning of the large intestine). A successful removal of the cancerous portion followed.  “They got clean edges, and sure enough he never had a recurrence of that again,” Clark said.

Then six months later, Clark again rushed Luca to the vet school after he collapsed. Another CT scan detected 90% blockage of a major artery by a blood clot, which was successfully treated with blood thinners for the rest of Luca’s life. “The vet school had now saved Luca’s life three times,” Clark said.

As Luca continued to age, regular visits followed to treat arthritis and progressive weakening in his back legs, largely through acupuncture administered by Dr. Jacob Mecham (recently retired from veterinary medicine).

It was the arthritis and hind-end weakness that led to his final visits.

The Clarks brought him to the hospital that night where Dr. Jana Gordon, Dr. Gabrielle Callanan and veterinary student Nicole Anderson (D.V.M. ’20) wrote in his chart: “Thank you for bringing Luca in this evening. He is such a sweet boy and a wonderful patient.”

Over the next two days, it was determined that Luca had lymphoma and it was suspected to be stage 5. Fighting till the end, the Clarks started Luca on chemo after consulting with Callanan and the rest of the oncology team. Luca went home, but “he just never regained his strength,” Clark said.

“So Monday morning, the following week, we called our vet to arrange for him to come out that afternoon,” Clark said. “But that morning, while my wife and I were cuddling with him, he passed away. As devastating as that moment was, it was the best thing. We didn’t have to give the vet approval to do his thing. Luca went on his own terms.” He was 15 and a half years old.

Clark said how grateful he and Jorie will always be to the vet school. “Everyone we met there were the most compassionate and thoughtful people,” Clark said. “And there is no question that Luca was with us for so long because of the incredible care that he received from them.”

Out in Montana, there’s a cabin called Casa di Luca.

At the end of the driveway, there’s a three-by-four foot slab of rock. “A few years ago, I got a stonemason in Bozeman to engrave a profile of Luca that we had from one of the photographs of him and engraved across the top is ‘Casa di Luca,’” Clark said. “That was a special place for him. And his last summer was there. Just so many great places for him to walk and swim, which he loved.  We always said ‘Luca Bratsi swims with the fish.’ So many memories of him.”

Creating a community of wellbeing

"I use my active listening ‘superpower’ to give others the chance to share," said Piper Palmgren (D.V.M. '23).

The Clarks were as loyal to Luca as he was to them.

Chester is one of only about 260 red wolves in the world.

'We get to teach the best': Dean president-elect of AAVMC

Tom and Chris Levy are giving back to benefit their beloved 'pets and partners.'

From IDEA to action: Committing to an inclusive future for veterinary medicine

Arlo was wounded in the line of duty.