Dexter was the Nitschelm's "heck of a good guy." Pictured here with Alyssa Nitschelm.
Photo (and photos below) courtesy of Dr. Curt Nitschelm.

Dexter was a big boy. One-hundred pounds. He was a lab-shepherd mix who lived for the juniper draws and ponderosa pine peaks of Central Oregon. He was Dr. Curt Nitschelm’s absolute buddy. “I'm looking at him right now. There's pictures of us at the counter here, and he was a heck of a good guy,” Nitschelm said over the phone. “He was just sort of a mongrel down the road, but his personality was, you know, beyond belief.”

Nitschelm has been a veterinarian since 1983. He was in the first class to graduate from Oregon State University’s Carlson College of Veterinary Medicine. So it was no secret to him that a large dog like Dexter had a limited time to get in his hikes and hunting trips. “It's hard to come to the reality that a hundred pound dog is going to live nine to 10 years on average,” Nitschelm said.

But when Dexter’s life was threatened at only eight years old that just wasn’t going to cut it.

Dexter had undergone multiple surgeries over the years to stabilize joints in his legs after ligament ruptures and to clean out loose pieces of cartilage and bone from his elbow dysplasia. So when he again started showing lameness in his front limb, Nitschelm figured that he just needed another joint cleaning.

“And then my wife said something like, ‘How about that bump on the distal end of his leg?’” Nitschelm said.

That bump was like a fist to the stomach.

“I go, 'uh-oh.' In our minds as veterinarians we know more than likely what that means,” Nitschelm said. Cancer. Specifically osteosarcoma. A cancer of the bones that metastasizes rapidly — spreading all across the body.

A standard procedure to treat canine osteosarcoma is amputation. It ensures that you get the entire tumor and, for many dogs, doesn’t hamper their mobility all that much. “There’s kind of an inside joke among veterinarians. You say dogs and cats are three-legged animals with a spare,” said Dr. Milan Milovancev, a board certified small animal surgeon at the Carlson College of Veterinary Medicine’s Lois Bates Acheson Veterinary Teaching Hospital. “Because most of these guys do great on three legs.”

However, for big dogs like Dexter, all that weight needs four limbs to spread the load. This is especially true for dogs who’ve already had other limb surgeries. “Because he’d had all his limbs worked on, an amputation really wasn’t a great option for Dexter,” Nitschelm said.

There’s a reason specialists are specialists. They hone in on a very particular part of their craft. All day, every day. A tweak here. A tweak there to improve results.

Every once in a while, the repetition and focus lead to a breakthrough. A new idea. A new type of surgery.

Dr. Bernard Seguin is now a professor of surgical oncology at Colorado State University. But from 2005 to 2012 he was an associate professor at Oregon State. During his time at Oregon State, he pioneered a limb-sparing surgery called lateral manus translation.

Before he left for Colorado State, he taught the surgery to Milovancev.

Milovancev and fellow board-certified small animal surgeon Katy Townsend have continued to perform the surgery at Oregon State. “Typically Katy and I do these cases together because we feel like a team approach is going to do everything we can to maximize the good outcomes and minimize the risks,” Milovancev said. “Over the years, we're pushing ourselves to slide along the spectrum towards refining the procedure with minor tweaks.”

With the benefits of modern communication and technology, Milovancev and Townsend are able to continue refining their work with the expertise of Seguin. “I'm able to send him the CT scan and send him the X-rays. I often take videos of the surgery. And so we have a constant flow of information and exchange ideas,” Milovancev said.

Here’s how the surgery works.

Look at your forearm and hand. There are two side-by-side bones connecting your elbow to your wrist: the radius and the ulna. The radius is the bigger one. The ends of the radius and ulna where they connect to the wrist are called the distal ends (distal simply means the farthest point away from the center).

The same is true for dogs.

One of the most common places for osteosarcoma to crop up is in the distal end of the radius where it connects to the wrist joint. “So what you do is, you basically take the radius, which is the bone that's affected, and cut that affected portion of it out,” Milovancev says. “And the part that you remove you have to customize for each individual dog.”

This is a huge benefit of the LMT surgery compared to other surgical options. “It allows you to personalize the degree of tissue resected. So you can maximize the amount that hopefully you can save and simultaneously maximize the chances that you get all the tumor out,” Milovancev said.

With the cancerous portion of the radius bone gone, the dog’s leg is left with a gap and a missing connection point. Look at your forearm again. Imagine if the bigger bone was no longer connected to your wrist because a portion had been cut out. You’d be left with just the ulna connected to one side of your wrist.

The same is true for dogs.

Here’s where the name LMT comes in. Remember, LMT is the abbreviation for lateral manus translation.

Manus is Latin for hand (paw, in this case) and lateral translation simply means moving something side to side. With the distal or connecting end of the radius gone, you need to make a new connection point using the ulna.

“So you just slide the paw over a little bit, and you make the ulna communicate with the main wrist bone called the radiocarpal bone,” Milovancev said. “And then you have to attach everything. So for that we use two big bone plates and screws.” One bone plate connects the ulna to the bone of the fourth digit on the paw. The other bone plate connects the third digit to the remaining portion of the radius, bridging the gap where the cancerous portion was removed.

From there it’s just stitching everything back up, keeping it cleanly bandaged and giving a few weeks for the soft tissue to heal.

If all goes well, LMT surgery, in combination with post-operation chemotherapy, will give a dog another nine to 10 months of life on average. “The post-op chemotherapy is dosed low enough to keep dogs feeling great and preserve quality of life, like they don’t even know they’re getting chemo, but high enough to slow down the tumor and allow them the time to enjoy the benefit of getting to keep all four legs,” said Milovancev. Osteosarcoma is such an aggressive type of cancer that by the time it’s diagnosed in a localized area like a limb there are likely cancerous cells in other parts of the body. Eventually, they take over.

Without surgery, the cancerous bone is a constant source of pain that limits quality of life, eventually causing a catastrophic fracture, if left untreated.

For Dexter, LMT was the perfect option. He’d be able to keep his front leg and his mobility for hiking and hunting.

More importantly, it would buy Nitschelm and his family time to process, cope and plan for the future. “Psychologically, for my wife and I, this probably saved us many thousands of dollars. I didn't have to go see the psychologist,” Nitschelm said. “He was just our rock and our man, you know. When they're part of your life and you do have a little bit extra you can spend, it's well worth it.”

The Nitschelms also had a new puppy and the extra months with Dexter would be invaluable. “We had a new little chocolate lab puppy that Dexter needed to spread his knowledge on to,” Nitschelm said. “And that would be about the number of months our new chocolate needed.” 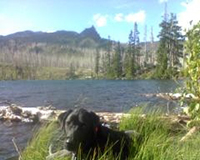 Dexter made it right around nine months before any issues cropped up. “We went on our walks every night and enjoyed it,” Nitschelm said. “At the last hurrah we went on a backpacking trip up into the wilderness, and he had an absolute ball, but that's about when the ulnar plate broke. It was just the wear and tear.  And of course he was walking all the time. So I'm sure it might have lasted a little bit longer if he just sat around at home and didn't do anything.”

The results of the first surgery were so successful that Nitschelm actually elected for another surgery to replace the broken bone plate in Dexter’s leg. The second bone plate unfortunately failed fairly quickly. “But about that time we noticed him becoming lame in the back leg, and that's when the cancer had spread to his back leg. There wasn't a whole lot more we could do at that point,” Nitschelm said. “So we enjoyed him the best we could and let him go peacefully when it was time.” 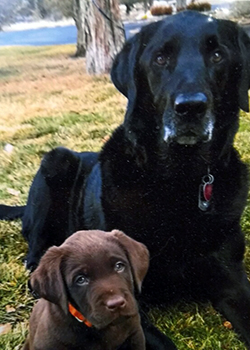 The chocolate lab puppy is now fully grown. His name is Rogue — after a brand of workout weights. “My daughter gave him to us for Christmas, and she was doing CrossFit,” Nitschelm said. “But I relate it more to the Rogue River because I love to fish.”

Like his predecessor and mentor, Rogue is Nitschelm’s sidekick. “Dexter gave us nine great years, and he trained our new guy who is just like Dexter in personality,” Nitschelm said. “He's a good boy.”

Together they’ve retraced many trails that he used to take with Dexter. And they’ve also left something behind.

“Dexter’s ashes are on every little favorite spot he liked to hike,” Nitschelm said.