When life takes away your tigers and elephants, you’ve got to come up with plan B. Kayla Christy, Kyndall Zieglowsky and Salene Freeman were planning to be in India last summer for an externship at a veterinary hospital.  “We were supposed to be working with elephants and tigers,” Christy said. “Due to COVID, obviously that was not a possibility because India just wasn't in the right position to be accepting people from over here. So that was a little bit of a bummer for everybody.”

The three are studying to become veterinarians at the Oregon State University Carlson College of Veterinary Medicine.

With India out of the question, they reached out to their faculty mentor, Dr. Brianna Beechler, assistant professor of research in the CCVM, and asked her advice. Beechler had the perfect idea. For years, she’d been connected to Chintimini Wildlife Center, a wildlife hospital, in Corvallis, Oregon. “I volunteered there as a vet student years ago,” Beechler said. “I had been wanting to get something going with Chintimini for students, because I feel it is a great resource, and they can provide experience for our students while our students can also conduct work that is beneficial to them.”

Beechler and the students connected with Dr. Claire Peterson at Chintimini and together they brainstormed a research project they could all work on together. They decided to look at what injuries and ailments brought raptor species into rehab centers and to “see which ones had the best record of being successfully rehabilitated and released,” Christy said.

Christy would work at Chintimini with Peterson. Zieglowsky reached out to Liberty Wildlife in Phoenix, Arizona where she had been working and volunteering off and on since 2016 and secured a summer research slot. Freeman did the same with Teton Raptor Center in Wilson, Wyoming where she had worked and volunteered prior to vet school. 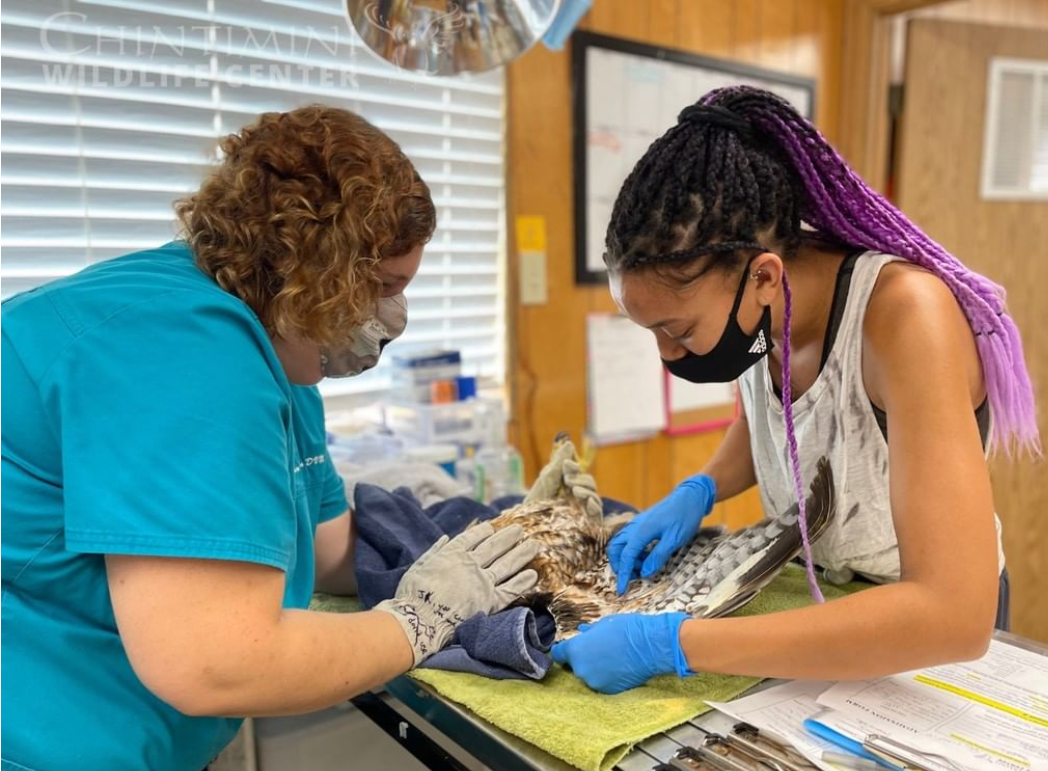 The team decided to focus on three species of raptors that were common across the centers: American kestrels, red-tailed hawks and all owl species. They developed collaborative intake sheets, weekly check-in forms and food charts to collect data on why raptors ended up in the facilities and whether rehab was successful (and on what time frame) or not.

Over the summer, the students tracked cases with the goal of collecting data on 10 different birds from each species at each wildlife center. “I think the coolest part for me was seeing Kyndall and Kayla's data on our collective spreadsheet in real time,” Freeman said. “It was neat seeing their treatment plans alongside mine and sparked interest for treatments I hadn't considered.” The three found that the injuries with the highest rehabilitation success rate were fledging injuries and body trauma. Those with lowest success were head trauma and electrocution.

According to Peterson, this kind of information is very important for wildlife centers to help optimize care and allocate limited resources. “The more we know, the better we can treat our patients and give them the best chance for return to the wild,” Peterson said. “Many wildlife rehab centers are limited in funding, volunteer power, and space – therefore being able to better triage from the intake of a patient can really help to better utilize such limited resources. We want to give every patient a chance, but logistically that’s not always possible; and if we spread ourselves too thin then we do a disservice to the patients who have a good chance of recovering to release.” 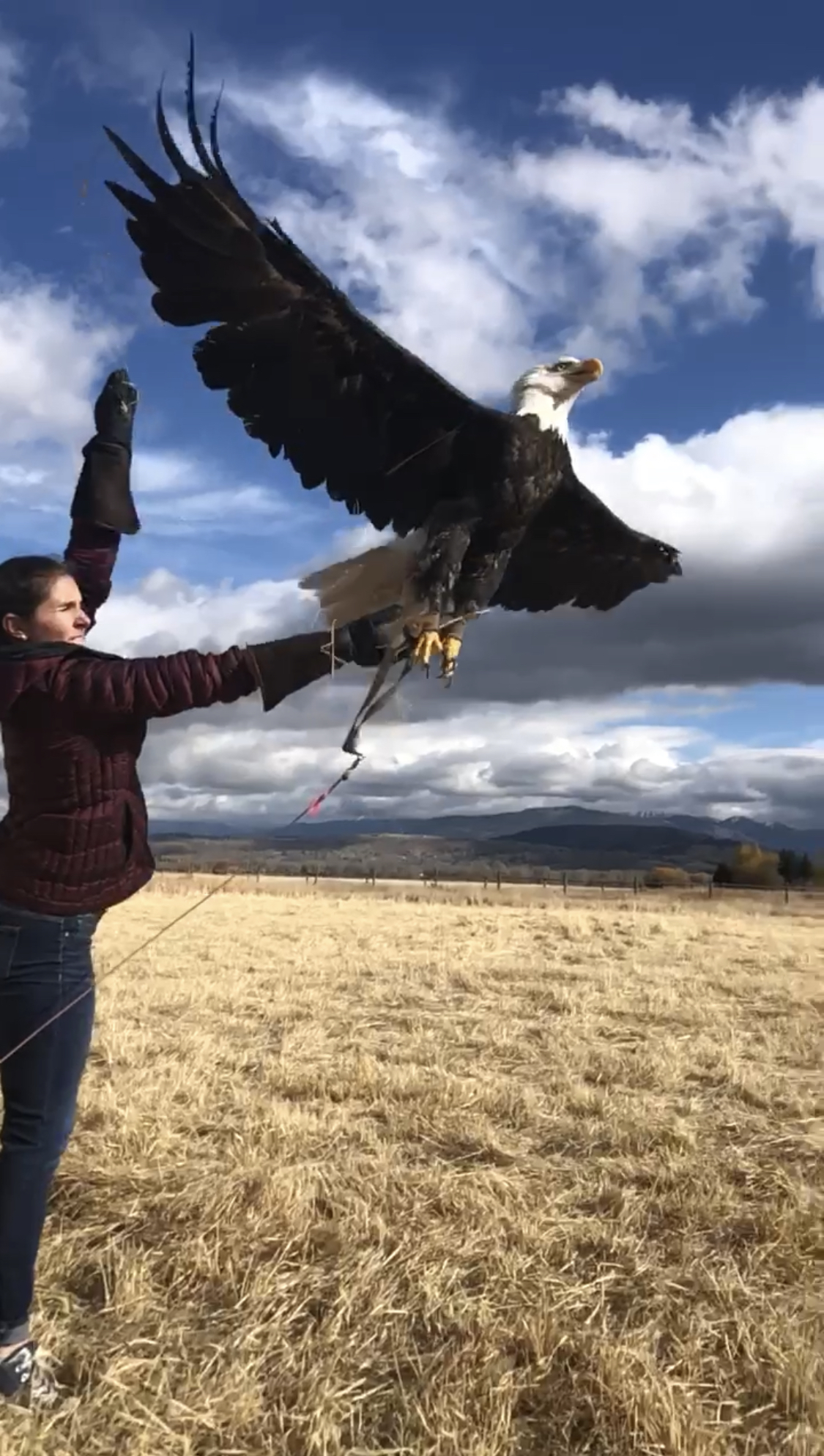 The research project also helped lay the groundwork for future studies. “Since there is very little research available for wildlife species or specifically avian species, this was a great introductory study appropriate for summer research to begin something that could be continued in a larger scale and timeline and will also be beneficial for avian rehabilitators across the country,” said Freeman, pictured left rehabilitating a bald eagle.

“Having data on birds pre- and post-release will allow rehab facilities to better care for their animals based on the research. Facilities will be able to see based on the specific birds, their injuries, medications used and treatment what the best course of action for that bird will be,” Zieglowsky added.

The team hopes that they can continue their research into the future and also share their templates to let other researchers and facilities join in. “We're just hoping that if we were able to get more data over a longer time period , that it would be able to be utilized in more rehabilitation clinics as kind of a standard of care,” Christy said.

This would help future veterinarians and wildlife rehabbers increase the number of injured raptors who are successfully rehabbed and released back into the wild – the ultimate goal whenever possible. “I’m excited that this research will lead to larger and more detailed studies to further help us learn about trends in wildlife, and how to better support our patients,” Peterson said. “Eventually I would love for the research to broaden to a conservation focus, in helping us to preserve the biodiversity on an ecological level. Rehabbers work with individuals, but we care deeply about conserving the whole as well.”