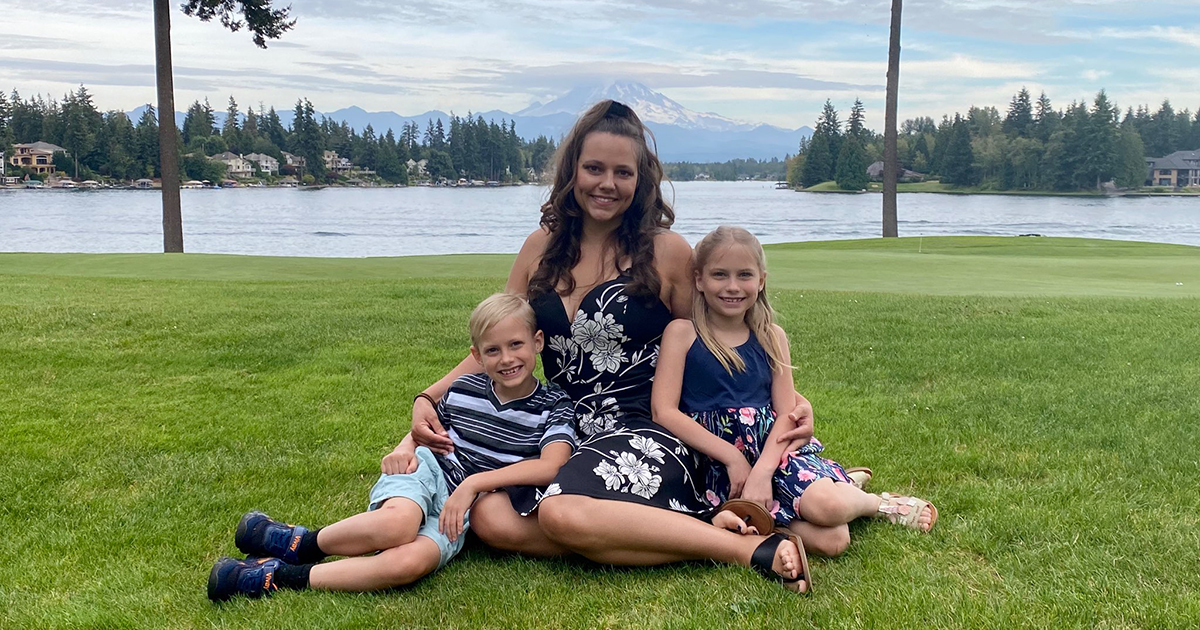 A phone call can change a life.

Cecilia Rosas and her twins (Nera and Benjamin, 8) were packing up their house in Klamath Falls, getting ready to move the 216 miles north to Corvallis, when she got the call that would change hers.

“When the dean [Susan Tornquist] called me and was telling me that I was awarded the scholarship, I just started crying. I just couldn't help but cry because I was so grateful,” Rosas said.

Rosas, an incoming veterinary student at the Oregon State University Carlson College of Veterinary Medicine and a single mom, was staring at a mountain of debt. According to the American Veterinary Medical Association, the average debt for a veterinary graduate in 2019 was just barely below $150,000.

“I was just going take out a loan, you know. I had a few months left on my GI bill. I was going to use that for as long as I could, but it probably wouldn't have even covered the first year of vet school,” Rosas said. “The full amount probably would have been $200,000 plus, because I have the kids and I have to have a bigger place and whatnot.” Instead, she’d be going to Oregon State on a full-tuition scholarship.

Rosas has wanted to be a veterinarian since she was in middle school.

Her family had recently moved from California to her grandmother’s 20 acres outside Grants Pass, Oregon — seat of rural Josephine County and, at 38,000 residents, by far its largest community. To help Rosas settle into a new area, make friends and learn about animal husbandry with their newfound space, her mom enrolled Rosas in 4-H and bought her a pregnant ewe.

Twins were in the cards. At birthing time, the first lamb frolicked into the world, but the second was having difficulties.

“So my mom called out the vet, and it was a woman,” Rosas said. “Her name was Dr. Heidi Buehner. And I just remember seeing her in awe: she's a woman. I guess I looked up to her in that way … And, she didn't hesitate.”

“And the first thing she goes to do is start giving it mouth-to-mouth and swinging it between her legs” Rosas said. “It was pretty intense. And I know she was a vet and it was her job, but to see someone that didn't know me, didn't know the animal and put so much effort into saving the lamb and the lamb ended up living … It was pretty great.”

Through 4-H, the initial vet call turned into a mentoring relationship between “Dr. Heidi” and Rosas. “She was always rooting for me to become a vet, but growing up, we didn't have a whole lot of money or anything. So I joined the Marine Corps to pay for some of the college.”

After her four-year contract with the Marines, Rosas returned to Oregon. With financing from the GI Bill, she earned a bachelor’s degree in biology-health sciences with a minor in chemistry in 2019 from the Oregon Institute of Technology in Klamath Falls. An acceptance letter to Oregon State’s veterinary medicine program and the phone call from Tornquist followed.

Full-tuition veterinary scholarships aren’t common because of the financial commitment. This is the first ever awarded by the Carlson College of Veterinary Medicine.

The phone call Rosas received from Tornquist might never have happened if a different phone hadn’t rung.

An Oregon couple, who live in the Portland area and wish to remain anonymous, were at their second house in North Albany. He’s a 1986 Oregon State grad who made a career as a pilot in the military, and she went to University of Portland and is a high school teacher. They both love sports and are often down in Corvallis for football and baseball games. They bought the house in 2019 as a “crash pad” for after Beavers games to avoid late night/early morning drives home after the games. The house is surrounded by trees.

“So we had our cat Jimmy down there, and a buddy came down and visited me,” the ’86 grad said. “And he had a brand-new dog.”

Jimmy was sitting in the driveway when the car door opened. As many dogs are wont to do, this one hurled himself out of the vehicle and sent Jimmy beelining for the nearest tree. A tall birch with no branches till “way the hell up there,” it offered a one-way route away from the canine’s canines. “Jimmy kept going up this tree. I’m guessing 80 feet,” the ’86 grad said. “And you knew his adrenaline was pumping. My buddy got a hold of his dog. And then Jimmy's just hanging on for dear life. And, you know, the inevitable is going to happen.”

Jimmy, not without leaving claw marks visible to this day, fell and “bounced right in front of me,” the ’86 grad said.

The couple rushed Jimmy to a local vet in North Albany who assessed his injuries and quickly referred them to the CCVM’s Lois Bates Acheson Veterinary Teaching Hospital for specialty care.

“It looked pretty bleak,” the ’86 grad said. Heart displaced to the other side. Collapsed lung. Kidney not in the right spot. “Jimmy was gasping for air.”

It was so bad hospital staff walked the couple through how they would attempt to resuscitate Jimmy. It would be a process similar to human resuscitation attempts. “You know, try to do heart massage, the paddles, all that,” the ’86 grad said.

With the extent of Jimmy’s injuries, hospital staff sent the couple home to North Albany while they gloved up and proceeded with emergency surgery.

Sitting on the porch, they received a phone call after about an hour. Jimmy had gone into cardiac arrest. What should they do with the body?

“Well, uh, I guess, you know, do an autopsy or something and check it out. But don't give up. If you're talking to me, who's doing the heart massage and all that?” the ‘86 grad said.

“We've got a team doing that,” the caller from the hospital said.

“Well, you know, get off the phone and don't give up on that.”

“All right, no, we get it. We understand it was a long ways to fall from.”

The Oregon State grad texted his friend with the dog to let him know what had happened, and to not feel guilty. It was an accident and no one’s fault. “And I hit send,” he said. “And it wouldn't go through. I hit send again. It would not go through.”

Just then, his phone started ringing. The caller ID showed the teaching hospital. “And they said, ‘Oh, we saved Jimmy. Jimmy's alive,’” the ‘86 grad said. “I got goosebumps. You know, I got goosebumps.”

It’s intriguing what causes people’s paths to cross in life. A desire to pursue veterinary medicine. A life-saving surgery on a pet. A couple of phone calls.

Long-time philanthropic supporters of animal rehab facilities, the couple were impressed with the care Jimmy and they had received at CCVM. They were especially grateful for the on-site chaplain and client volunteer who’d worked with them during Jimmy’s ordeal. “A lot of people, a lot of places would not even think of that, but it's very, very important. I mean, people are attached to their animals like nobody's business,” the ’86 grad said.

They started looking into giving a gift to CCVM. They are both lifelong Oregonians. They both love animals. An uncle is a veterinarian. There’s multigenerational family history with Oregon State for the ’86 graduate.

They wanted their gift to have a direct impact. They wanted it to benefit fellow Oregonians, as they both deeply believe in the land-grant mission of Oregon State to promote “progress for the people of Oregon, the nation and the world.”

“We just started thinking, what is the simplest possible thing we can do to actually help somebody from Oregon?” the ’86 grad said. They “did a little math” and figured out what it would take to fund a full-tuition scholarship for one incoming student.

Rosas, Nera, and Benjamin are settling into their new place in Corvallis, still going through the last few boxes and unpacking memories.

Rosas hopes her kids will one day join 4-H. A member of the equestrian team in high school, she dreams of a future where they live in a rural area and might be able to get a horse or two. “I definitely want to get into large animal/equine, and I want to do a mobile veterinary service type deal,” Rosas said. “A lot of the rural communities don't have a lot of access to veterinary care or anything like that. So it would be nice to go out to do a reach-out program to those communities that don't necessarily always have the access to it.”

For now, she and the kids are preparing to start their new school years in a new place. There are challenges: the rigors of vet school, the effects of COVID-19 on life and education (with both her and the kids looking at mostly remote learning for the foreseeable future), raising a family as a single mom. But with the scholarship, she won’t be worried about student loans, or scraping by on the final leftovers of the GI Bill. “I don't know what I did for them to pick me or anything, but I'm very grateful,” Rosas said. “When the dean told me, she said, ‘Hopefully I made your day.’ And I said, ‘No, you've made my whole year.’ And I was thinking after the call: You’ve made the rest of my life. It's, it's amazing."

Chester is one of only about 260 red wolves in the world.

'We get to teach the best': Dean president-elect of AAVMC

Tom and Chris Levy are giving back to benefit their beloved 'pets and partners.'

From IDEA to action: Committing to an inclusive future for veterinary medicine

Arlo was wounded in the line of duty.

Hey, octopus. How ya doing?

Giving back to ‘reflect the world we practice in’