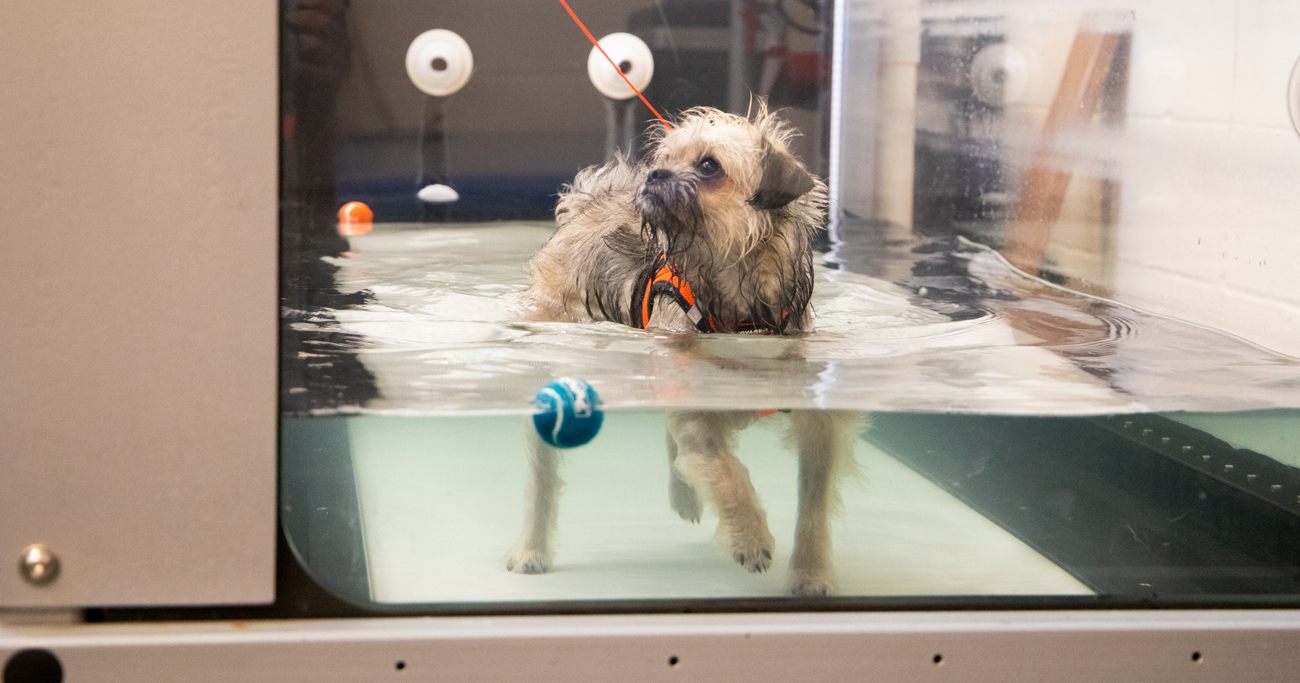 Vanessa, a pug-mix, is absolutely strutting in the clear H2O of the underwater treadmill at the rehabilitation unit in the Oregon State University Carlson College of Veterinary Medicine’s teaching hospital.

The water has her fur spiked like she overdid the LA Looks Extreme Sport hair gel.

She’s being put through her paces by Sara Short, a certified veterinary technician at the CCVM specializing in rehabilitation.

This whole situation is a far cry from the parched desert in Southern California where Vanessa was abandoned as a tiny pup with matted fur, physical disabilities and not a hope in the world.

Theresa Hogue, her husband Joseph Orosco and their two kids — Sophie, age 11 and James, age 9 — love, love, love their pets. “Vanessa is the youngest,” Hogue said. “She’s six months old, and then we have Una. She is a Chihuahua-dachshund mix and she is two.” Una was adopted from Wiggly Tails Rescue in Eugene, Oregon.

Then there’s the full pug Tilly, age almost 3. She was adopted through Pug Nation Rescue of Los Angeles. “So I had to fly down to LA to pick her up,” Hogue said.

Next is six-year-old Simone, a Boston terrier-pug mix. “We call her the Irish cop because she's like the enforcer. So like she will literally put her paws on the head of the other dogs if she thinks they're messing around too much,” Hogue said. Simone was adopted from Safe Haven Humane Society in Tangent, Oregon.

The oldest is Sarek, another Chihuahua-dachshund mix. Sarek came from Heartland Humane in Corvallis, Oregon. “He apparently was found abandoned on Bald Hill in a cardboard box full of kittens,” Hogue said. “He's grumpy, and he owns our bed.”

Two cats, Gomez and Morticia, from Heartland round out the pack. “We also have four chickens, but they’re not exactly rescues,” Hogue said. 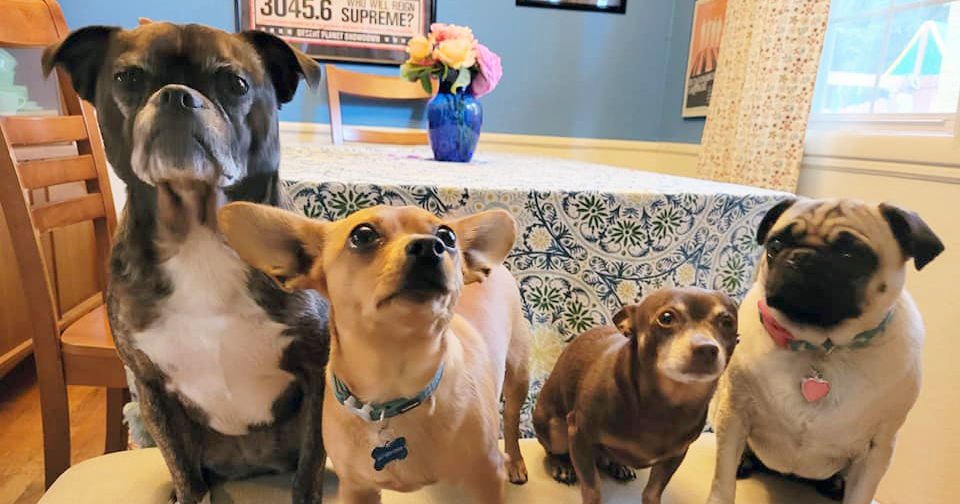 The kids had been wanting a puppy for a while, and with Hogue, who works in the Oregon State University news office, and Orosco, an Oregon State professor of philosophy, both working from home due to COVID-19, the timing was right. Hogue started scouring the websites and social media of rescue operations across the region.

“On Northwest Dog Project, on Instagram, we saw this photo of this very pug looking dog and next to him was this little goblin. And I started reading the post and they were both pug mixes,” Hogue said. “They were abandoned, and they needed someone who had experience working with dogs that had leg problems.” Both dogs had what appeared to be Swimmers Syndrome, a fairly treatable condition where the hind legs are splayed out to the side like flippers, causing mobility issues. Hogue was immediately intrigued.

Their older dog Simone “the Irish cop” had luxating patella (a kneecap that would slip out of joint), and had received surgery and rehabilitation at the CCVM’s Lois Bates Acheson Veterinary Teaching Hospital. “Since I had that experience, I thought, ‘Well, I can help with this dog,’” Hogue said. “So I applied, and because I had that previous experience, they were interested in having us adopt her.”

At the time, Vanessa was known as Olive and was being fostered by a lady who owns a farm near Eugene. “She has this cute little ‘she shed,’ and the puppy is in there,” Hogue said. “And it was her and her brother, and her brother was just this hulking pug. And he was just knocking her over, and she was about this big [mimics the size of a softball]. She'd just go flying in the air. And then she tried to get back up, and she was just this little puff ball. And everyone melted, my husband melted. We were all just like, ‘Awww.’”

The name Olive didn’t last long. “We really liked the show called Penny Dreadful,” Hogue said. “And the main character is played by Eva Green, and her name is Vanessa Ives, and she's this like this very spunky, powerful, magical kind of hero. And I just really, really like the way her character is written. I wanted like a strong female character, and I also wanted something that's kind of unusual, like who names their dog, Vanessa? And it just really suits her, but we also call her Nescafe, which is that instant coffee that you can get, like she's really spunky and caffeinated.

Swimmers Syndrome was an incorrect diagnosis it turned out. A few days after adoption “we took her to our vet at Willamette Veterinary Hospital for a physical,” Hogue said. “Our vet immediately suspected she did not have Swimmers Syndrome, so she ordered radiographs, and after consulting with an orthopedic specialist in Eugene, they determined Vanessa had severely deformed legs and knees and required immediate surgery.”

Vanessa was referred to the CCVM and Dr. Jen Warnock, small animal orthopedic surgeon, performed extensive reconstructive surgery to fix her deformity. “She came out of surgery great,” Hogue said. “And they've been really impressed with her progress, but part of that has been she needs physical therapy to relearn how to walk because she walked kind of Charlie Chaplin style before. Now that her knees are correct, they have to train her and strengthen her up. So it rewires her brain and all of that.”

As she does for all her patients, Short tailored a treatment plan for Vanessa to meet her specific needs, demeanor and maturity level. “So it's puppy behavior versus an adult dog that has maybe has a little more training,” Short said. “And her attention span is a lot shorter than some dogs would have. We have been trying to do things that keep her environmentally stimulated, which means that we kind of have to do a lot of baby talking and coaxing and a lot of snacks and treats and toys. She loves toys.”

Her treatment regimen includes lots of inclined walking, sitting on an incline and she’s doing “incline planks,” said Short. “So she's elevating the front end.” Vanessa is also receiving laser therapy and walking on the underwater treadmill. “I need her to just learn to reassociate or reacquaint her backend with her body essentially,” Short said. “Vanessa's problem forced her to believe that she couldn't use her back legs.” 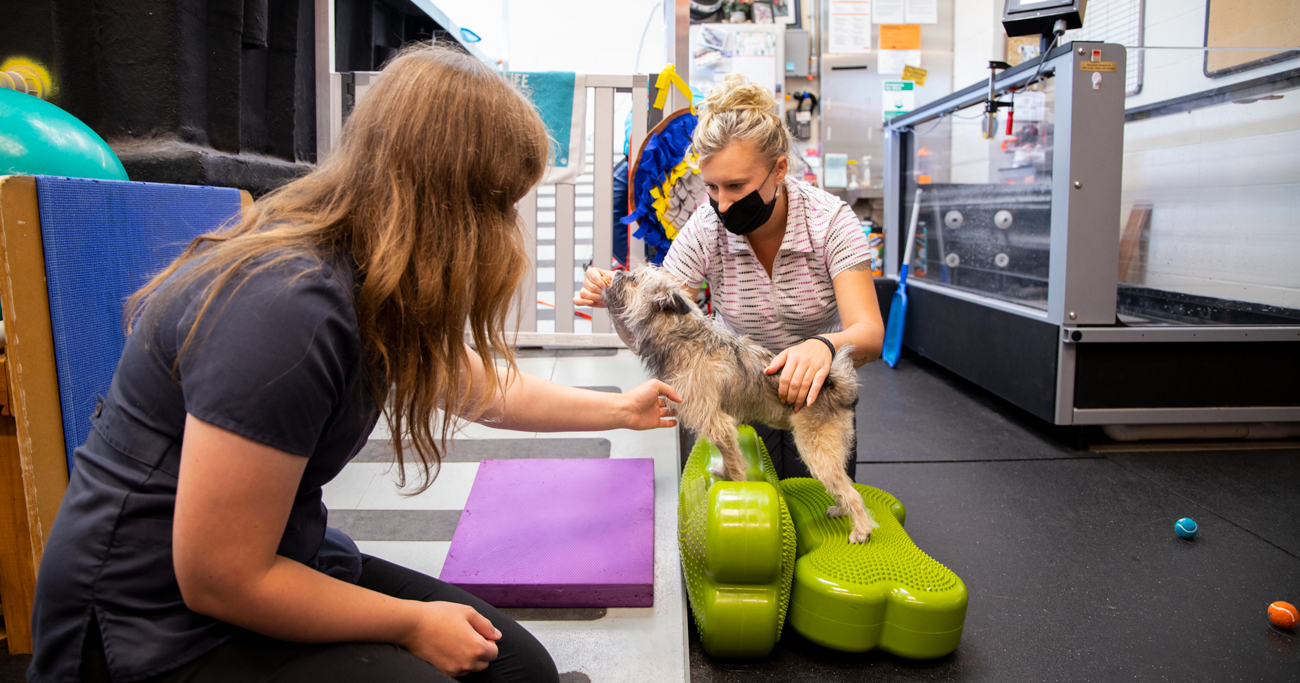 Vanessa works on her plank with certified veterinary technician Sara Short and a student.

Hogue also provides lots of at-home therapy based on Short’s plan to complement treatments at the CCVM. “Vanessa loves physical therapy,” Hogue said. “Now she's just like a normal dog. She goes on walks with the other dogs. She's running around in the backyard and wrestling and everything like that. So it's just been a huge improvement. She loves getting the laser treatments, and she loves the underwater treadmill.”

From the California desert, to the Northwest Dog Project, to the foster farm, to the Hogue-Orosco household, to the CCVM, to surgery and now thanks to each rehabilitating step on the underwater treadmill, Vanessa is moving in the right direction.